what are the Lucky 13 cartoons?

A safety message with a difference! In 2008, Survival Skills was contacted by the European Motorcycle Industry Association – ACEM – to research and storyboard (lay out the basic design) for a series of road safety messages aimed at powered two wheeler riders. This was to be within the framework of the European Road Safety Charter, and the design brief was to explain the hazards created by the road infrastructure itself, in a format that would appeal to younger and more mature riders alike. After discussions, we settled on a cartoon series, with a nod towards the style of the famous 'Joe Bar' cartoons of the 1980s.

Kevin continues: "My brief from ACEM was to use my experience as a motorcyclist to identify the kinds of issues caused by the design of the riding environment itself causes powered two wheelers problems, for example, metal access covers, junctions, poor road surfaces and decreasing radius turns, After some weeks of research and discussion with ACEM, I had a total of thirteen different topics I wanted to cover.

"The next step was to turn these into a 'storyboard' so that a cartoon could be drawn around each theme. To do this I had to summarise each issues as succinctly as possible, in a way where the dialogue flowed from beginning to end.. I also had to keep the language non-technical, not just so it could be understood by riders but also to aid translation! This stage of development took several more months of work.

"Taking my words and design of the storyline for each cartoon, a Belgian cartoon studio created the character, Lucky 13, who features through the series of cartoons. He tackles the issues just as a new rider might, and learns a lesson from each experience."

The thirteen cartoons were published throughout 2009 and were translated into at least eight different european languages. 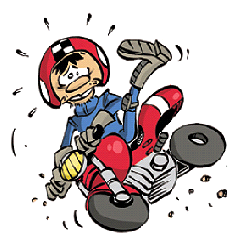 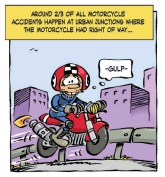 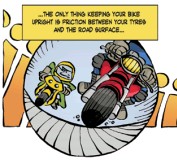 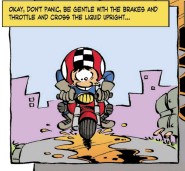 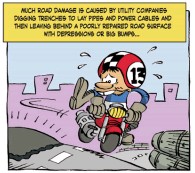 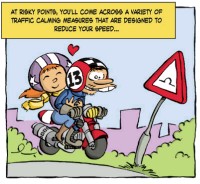 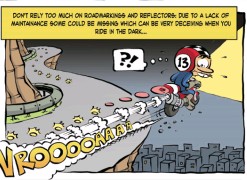 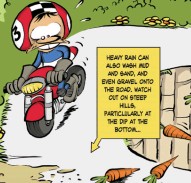 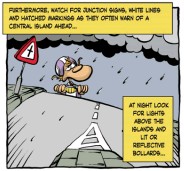 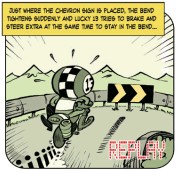 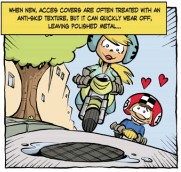 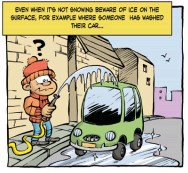 go back to the main page